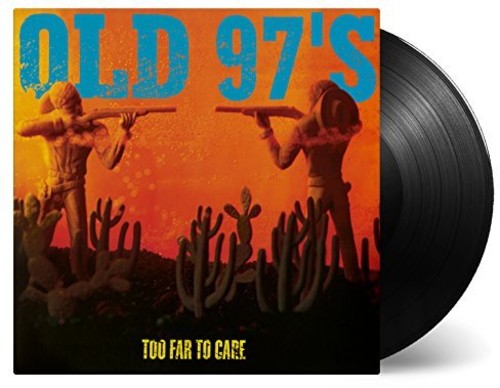 Limited 180gm audiophile vinyl LP pressing including insert. The Old 97's are an alternative country/rock band from Dallas, Texas formed in 1993. They are recognized as pioneers of the alt-country movement during the mid to late 90s along with bands such as Uncle Tupelo, Drive-By Truckers, Whiskeytown, The Jayhawks, and The Bottle Rockets. Too Far To Care is the third studio album by the band, originally released in 1997. The album's title comes from the song 'Streets of Where I'm From'. Lyrically the band's constant touring is evident in songs like 'Barrier Reef' (with references to Chicago), 'Broadway' (in New York City), and 'Niteclub' (inspired, according to the band, by clubs in Cleveland, Ohio and Ann Arbor, Michigan). 'Four Leaf Clover' was originally recorded on Hitchhike To Rhome, the first Old 97's album. Rhett (vocalist/guitarist) was searching for a duet to record with friend Exene Cervenka and 'had started work on an old-fashioned duet that I thought we might sing, but Exene proclaimed it 'too pretty'. That song later became 'Fireflies'. Instead, Exene sang on 'Four Leaf Clover', replacing the lyric 'nothing to impress you' with 'nothing to attract you' which Rhett found 'much sexier'.
back to top