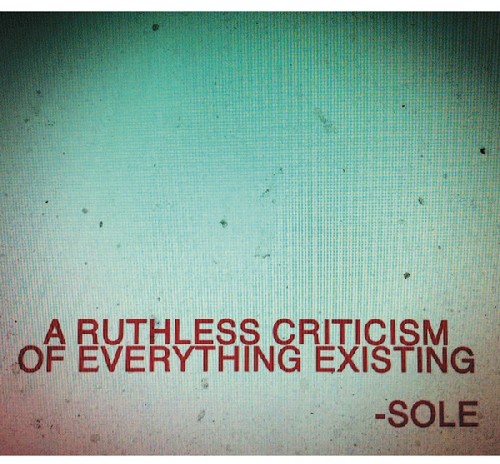 A Ruthless Criticism Of Everything Existing
Artist: Sole
Format: CD
New: Out of Stock
Wish

2012 release, Sole's first solo album in seven years. The album is about resistance, power, global revolution and philosophy. The title is lifted from a Marx letter by the same name. This avant-garde hip-hop album takes the rap-as-critical-theory aesthetic that Sole has developed over the past few years on the Nuclear Winter mix tapes to a more concrete and original musical format. Following up on the critical success of Hello Cruel World, a Ruthless Criticism is the next logical step in this development of rap music; it is challenging and sometimes poppy while still pushing things in a more experimental, belligerent and militant direction. Like Sole's previous solo albums, a Ruthless Criticism of Everything Existing has a multitude of collaborations with various producers, and features Bus driver, Alias, Open Mike Eagle, Alias, Ryan Hemsworth, Ausker, Factor, Man Mantis and others.