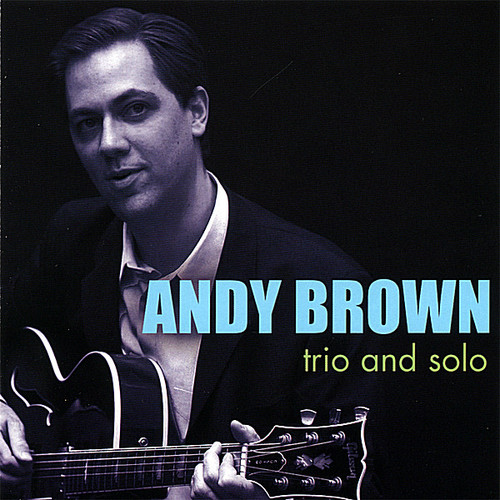 Andy Brown is a guitarist based in Chicago. Born in New York City in 1975, he has played professionally for over twenty years. He has had a varied performing career that has included stints in Cincinnati and New York. Since coming to Chicago in 2003, Andy has been fortunate to work at many of the area's finest jazz venues with his own bands, as well as playing his unique brand of solo jazz guitar. He has led his own groups at clubs like The Green Mill and Andy's Jazz Club, and has backed visiting jazz names at places including The Jazz Showcase and the Harris Theater. As a sideman he has performed with internationally know jazz musicians including Howard Alden, Harry Allen, Ken Peplowski, Hod O'Brien, Anat Cohen, Kurt Elling, and Joe Cohn as well as many others. He has also worked with many names on the Chicago jazz scene at nearly every spot that features live jazz music including Russ Phillips, Don Stiernberg, Kim Cusack, Chris Foreman, Bobby Lewis, Chuck Hedges, Judy Roberts, and Howard Levy. His love of great tunes, as well as accompanying skills have made him a favorite with vocalists. Married to frequent partner vocalist Petra van Nuis, Andy has worked with many of Chicago's finest singers including Frank D'Rone, Jeannie Lambert, Marc Pompe, Kimberly Gordon, and Hinda Hoffman. Andy also had the good fortune to accompany Barbra Streisand when she appeared on the Oprah Winfrey Show in 2009. Andy has made many festival appearances around the world, including the Chautauqua Jazz Party, Chicago Jazz Festival, Momento Rio Bandolim Festival in Rio de Janeiro, Evergreen Jazz Festival, Fitzgerald's American Music Festival, Wes Montgomery Festival, New Acoustic Gallery Mandolin Festival, Gorinchem Jazz Festival in the Netherlands, Midwest Gypsy Swing Festival, Euro Festival Zupftmusik, the Cedar Basin Jazz Festival, and the Wintergrass Festival in Seattle. Andy has provided the music for a wide variety of parties and private events. In 2012 his trio was invited by the Chicago Mayor's office to perform for the Nobel Peace Prize dinner in Chicago, where invited guests included U.S. presidents Bill Clinton and Jimmy Carter, as well as the Dalai Lama and Mikhail Gorbachev. Also in 2012, Andy's trio was hired by the U.S. State Department to provide music for the opening night gala at the NATO summit held in Chicago. Andy enjoys being a member of several bands besides his own. He works often with vocalist Petra van Nuis, either in duo or larger groups, including Petra's Recession Seven. They have worked together all over Chicago and in venues throughout the country, as well as tours of Europe and Canada. Andy plays regularly with jazz mandolinist Don Stiernberg's trio. They have worked at festivals overseas, as well as throughout the United States. He is also a member of trombonist Russ Phillips' group, both with Russ' Quartet and his Windy City All-Stars. Andy has been featured on a wide array of recordings. As a leader he released his debut recording "Trio And Solo" in 2007 which received warm reviews from critics and fans alike. He has collaborated on three CD's with Petra van Nuis, the most recent being the 2012 release 'Petra's Recession Seven-Live In Chicago.' He was also featured on Kimberly Gordon's 'Sunday' in 2011 on the Sirens record label, as well as Russ Phillips' recording 'One Morning In May,' released in 2008. Andy had the good fortune to learn directly from several guitar masters, including Cal Collins, Ted Greene, and Howard Alden. His most important mentor was the late Kenny Poole, who called Andy his protĂ©gĂ©. 'An uncommonly good player, with a modesty that brings to mind the fine Canadian guitarist Ed Bickert and a warmth suggestive of Joe Pass...has a gift for melody and plenty of rhythmic confidence...projects a naturalness when phrasing, and his overall intelligence makes understatement and subtlety virtues.' ?- Frank-John Hadley, Downbeat Magazine 'A tasteful, musical player...for all his easygoing virtuosity, he places the emphasis on musical phrase rather than pyrotechnics.' ?- Howard Reich, Chicago Tribune 'Brown manages to wrap his rich harmonic style in a unhurried feel that calls to mind the spirit of George Van Eps with a current harmonic understanding...over-flowing with skill and imagination' ?- Jack Huntley, All About Jazz 'Brown is a world-class guitarist who is more than capable of giving a clinic on accompaniment and solo guitar performance.' ?- Chip Henderson, Just Jazz Guitar 'Andy Brown is not about flash and dazzle but about nuance and tastefulness.' ?- Jeff Tamarkin, All Music Guide "Andy Brown is much more than a very practiced jazz musician - he's the real thing and havin' fun doing it." ?- Palmer Moore, Ohio Fingerstyle Guitar Club "Brown has an understated style whereby less is clearly more. That's not to say that he doesn't have fantastic chops. He can rip it up as easily as anyone. Yet his dedication is firstly to clean, thoughtful musicality, rather than just showy flash." ?- Chicago Jazz Magazine.