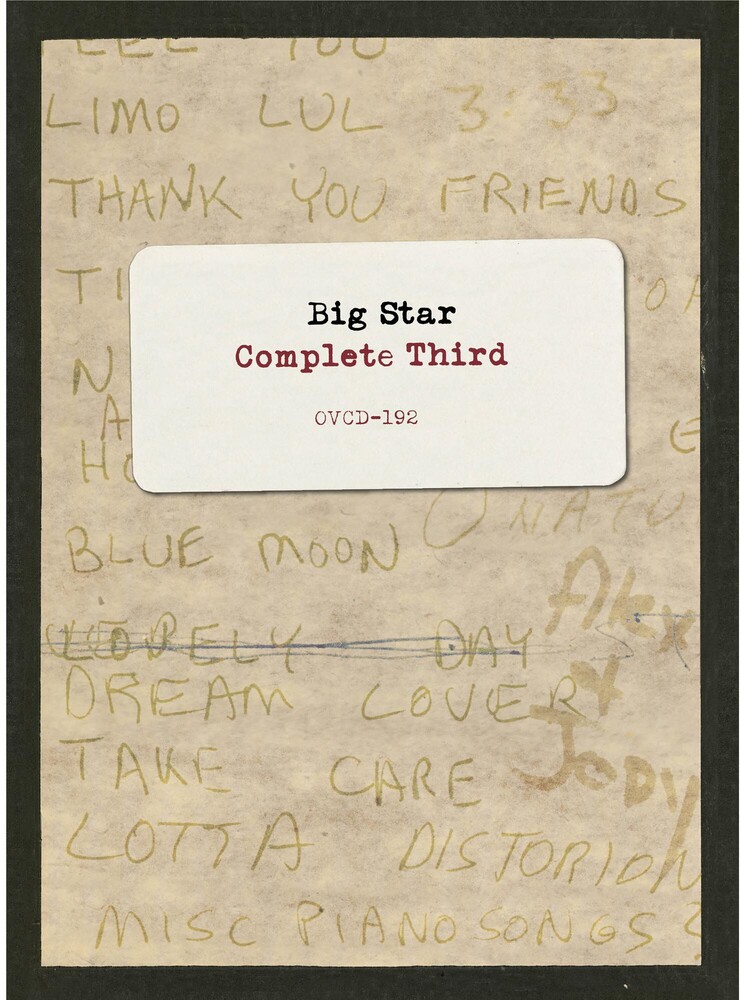 “The small but rabid cult of Big Star, composed initially of rock critics and hometown Memphis hipsters, coalesced around 1972’s #1 Record, which supercharged the legacy of the Beatles and Byrds, and 1974’s Radio City, which brought additional attitude and poignancy to the recipe. The shimmering brilliance of Big Star’s sound and songs on those two LPs, along with its underdog allure, would have been sufficient to perpetuate the band’s legend. But there was a third album, and that strange beast of a record made all the difference for subsequent generations of fans—many of whom formed bands of their own—who turned each other on to this music as if it were a secret religion or a trippy new drug.” - Bud Scoppa’s Complete Third liner notes “Ask any of the original participants who made the record, and none of them would say they expected this album to even see a real release, much less end up on Rolling Stone's list of the 500 best albums of all time… It's an amazing snapshot of the artists and the times and circumstances in which the recordings were made. It's a great testament to Third that an album that almost nobody was interested in at the time of its pressing, is now loved and sought out by an ever growing legion of fans. I guess that's called ‘ahead of its time.’” - Adam Hill’s Complete Third liner notes After more than a decade of looking for additional music beyond the original album that is Big Star’s Third, the search is now over. While some demos and alternate versions of songs have dribbled out over the years across various compilations, all extant recordings made for the album are presented here for the first time in Complete Third. The collection boasts 69 total tracks, 28 of which are previously unheard session recordings, demos and alternate mixes made by producer Jim Dickinson and engineer John Fry. The set allows the listener to track the creation of the album from the original demos, through sessions to rough mixes made by Dickinson and Fry, to the final masters of each song. Besides the contextualizing main essay from writer/A&R man, Bud Scoppa, extensive notes from original participants and artists influenced by Big Star are also included: Mary Lindsay Dickinson, Mitch Easter, Adam Hill, Elizabeth A. Hoehn, Susanna Hoffs, Peter Holsapple, Gary Louris, Mike Mills, Cheryl Pawelski, Debbi Peterson, Pat Rainer, Danny Graflund, Jeff Rougvie, Pat Sansone, Chris Stamey, Jody Stephens, John Stirratt, Ken Stringfellow and Steve Wynn. Initially, the collection will be released in a 3-CD boxed set and digitally with three separate double LPs to follow, each vinyl volume representing a CD in the boxed set.