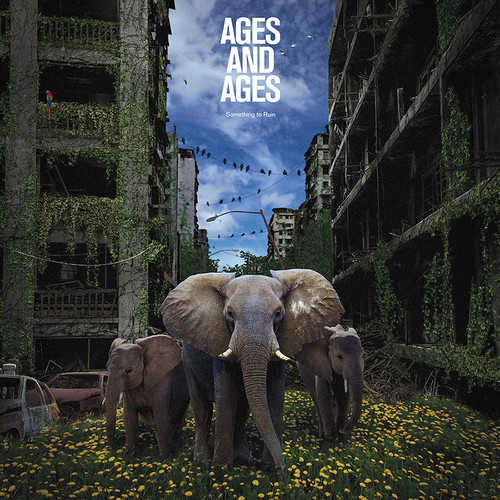 Something To Ruin
Artist: Ages and Ages
Format: CD
New: Out of Stock
Wish

If Ages and Ages’ debut album Alright You Restless declared independence from the cynicism and self-consciousness plaguing a generation; and the follow-up Divisionary was an exercise in confronting change, conflict, and loss; Something to Ruin confronts the debris of our collective failures and asks whether we might be better off letting go and starting over. Recorded at Isaac Brock’s studio (Ice Cream Party), this album still has plenty of the infectious and joyful melodies the band is known for, but this time the stakes are higher. It raises questions about facing our society’s collective wreckage both environmentally and culturally. With all members hailing from Portland, Oregon, Something to Ruin, explores what it’s like to watch your hometown implode in a frenzy of real estate development and lifestyle branding. Songs like “Kick Me Out” and “I’m Moving” describe the “manufactured wilderness” that former bohemian sanctuaries like Portland & other cities have become. The album’s lead track “They Want More,” also draws a line in the sand to confront the changing landscape of music, art, cities and lifestyles. While writing this record, the band’s leaders, Rob Oberdorfer and Tim Perry, embraced synthetic sounds and artificial textures– a marked difference from the organic and documentarian approach on their previous albums. The record is also more groove-laden, with electronic experimentation pushed to the surface. The richly layered harmonies of Sarah Riddle, Annie Bethancourt, Colin Jenkins and Oberdorfer mirror themes about the power (and impotence) of the individual and the need for community. Isaac Brock’s unmistakable, marbled baritone vocals jump out on on “So Hazy” and traces of old Modest Mouse can also be heard in the discordant guitar and mechanical noise that interrupts or ends the album’s title track and “All of My Enemies.” If there is an anthem on Something to Ruin comparable to “No Nostalgia” and “Divisionary (Do the Right Thing),” it resides in the album’s final track “As It Is” which contains the trademark exultant vocals that endear the band to its fans. The most curious part about this band is their ability to address themes of isolation, obscurity, and rejection of the well-paved path while still expressing an infectious hope so contagious that even the most cynical listener can be brought into the fold. It’s the reason why President Obama felt compelled to add their song to his personal reelection playlist, a high school choir in Burkina Faso adopted their songs, and NPR claims their music “could actually change your life.”