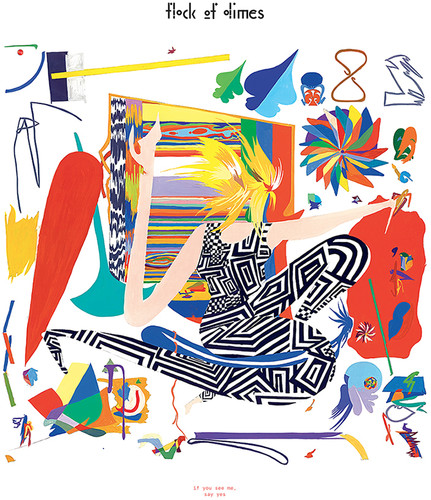 It’s been a year since Jenn Wasner left Baltimore, where she grew up, where her family is, where she began playing music, where she started Wye Oak with Andy Stack, where she was a beloved and integral part of the community. “Baltimore, to me, is noise, and light, and excitement, and constant activity, and all the good and bad things that come along with that,” says Wasner, who also shared that Baltimore is overwhelming in the best and worst senses of that word. She was worried that it was eating her alive. Now Jenn lives in a brand new place. And so when you listen to her debut record as Flock of Dimes, If You See Me, Say Yes, think about how when she says yes to one thing, she's saying no to another. And how this record is a kind of monument to those moments of being poised on the precipice, that feeling of diving into the new but at the same time looking back at what's left behind.

When standing on an edge like that, both sides — what came before, what’s ahead — are in such sharp relief, and this record comes out of that intensity. From “Birthplace” to no place at all, from a deep history to a future in flux. Maybe that’s why so many of these songs are built around these ecstatic moments when it feels like something is spilling open, or breaking through, from the cosmic dance-dream of “Minor Justice” to the soaring reassurance of “Everything Is Happening Today.” Or “Semaphore,” a signal sent from a distance, an attempt to bridge the infinite space between two people (or two cities). This record is three years in the making — from the initial recording in Baltimore (with Mickey and Chris Freeland), to the process of refining and tweaking (alone and with friends in Durham, Brooklyn, and beyond), to the mixing in Dallas (with John Congleton). It’s the first record where Wasner has done the bulk of the work — writing, playing, producing— by herself. Wasner said that making this record on her own after having spent so much time making music in close collaboration was harder than expected, but also liberating. You can hear that in the songs, too — so many of them are about being lost, and being free. Wasner always talks about the various competing versions of herself, the Jenn who tells herself that she's being self-indulgent, that she should be out saving the world (whatever that means), and also the workaholic Jenn who never wants the record to be done—who identifies with Arthur Russell, for whom declaring a song finished felt like a kind of death. But the songs on this record seem to come from another Jenn — the version of herself who “believes in magic, and love, and the mysteries of the universe and shit like that,” as you put it. The Jenn who loves making songs more than anything.