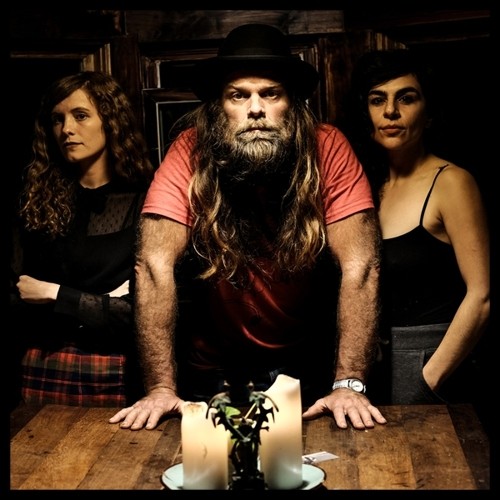 Vinyl LP pressing. 2016 release, the eponymous full length debut from the avant-chamber ensemble formed by polymath percussionist Thor Harris. It was recorded in Albuquerque, New Mexico, and produced by Jeremy Barnes and Heather Trost from A Hawk & A Hacksaw and Deerhoof's John Dieterich. The three core members of the band are Peggy Ghorbani on marimba, Sarah "Goat" Gautier on marimba, vibraphone, xylophone, organ, voice, mellotron and piano, and Harris on sundry percussion and wind instruments including some of his own devising. They are joined by Jeremy Barnes on accordion, drum, and mellotron; Heather Trost on violin, voice and marimba; John Dieterich on guitar, bass, castanets and special effects; and Raven on bone flute, and electronic sounds. The band was inaugurated after Harris toured for five years as the percussionist of iconic avant-rock ensemble Swans. As a vehicle for experimentation with American Minimalism with a rotating cast of Austin-based musicians, Harris draws on composers including Terry Riley and Steve Reich, but also such diverse influences as Brian Eno, Aphex Twin, Moondog and The Necks; the album centers around a polyrhythmic core of mallet-struck instruments-primarily marimba, xylophone and vibraphone.