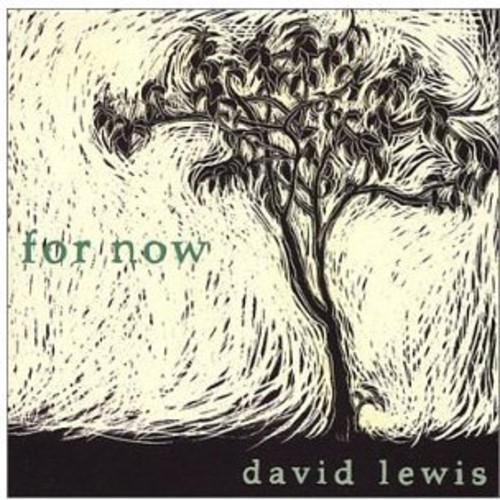 British singer-songwriter David Lewis's 1996 debut, the acoustically oriented 'No Straight Line', was awarded a four-star rating by the All Music Guide, a handful of perceptive and positive reviews, and a quick trip to the cutout bins when his American record label went out of business the following year. Undeterred, Lewis and longtime friend, co-producer and occasional songwriting collaborator, the witty and insightful solo artist John Wesley Harding, worked sporadically over the next five years on 'For Now.' Lewis's sophomore CD alternates a restrained folk approach and more fleshed-out full-band backing on it's ten songs, including three Harding co-writes and a cover of the late British songwriter Nick Drake's 'Northern Sky.' 'We didn't want to make the same album all over again,' explains Lewis, 'so we thought it would be interesting to work on some band arrangements.' Enlisting such Harding associates as alt. Country/roots singer-songwriter-guitarist Chuck Prophet (formerly with the band Green On Red), seminal Lewis influence Al Stewart (second vocals on 'You Don't Know'), co-producer/musician/power pop maven Chris von Sneidern, and multi-instrumentalist Robert Lloyd, Lewis has succeeded in creating a unified collection of songs that reflects his talent and inspirations. Among the CD's highlights are the rollicking 'Rain Stops Everything' (powered by David's gutsy harmonica), the sensuous, mysterious 'Ramadan Moon,' which features Richard Thompsonesque guitar from Prophet, and the valedictory 'Weary Traveller,' with regret-filled solos by Prophet and accordionist Lloyd. Enticed by an excellent bottle of wine, Al Stewart, one of David's heroes, joined him in the studio to sing on 'You Don't Know Me.' Although Lewis's globetrotting experiences inspire some of his material, the various aspects of love - accepted, imploded, frustrated, postponed, denied - dominate the majority of the songs, including 'Almost a Stranger,' 'Your Kind of Madness,' 'Let the Sunlight Dry Your Tears' and 'Too Much Love.' The contrast between Lewis's boyish voice and the depth of experience in his lyrics sets up an engaging invitation for listeners to get lost in his music. Bio: David Lewis grew up in a musical family in the city of Bath in western England. As a teenager in the mid-Seventies, he preferred contemporary British and American folk music to the pop and progressive sounds currently popular and the classical music heard at home. He was enthralled by the 'timeless, mystical quality' of the Strawbs and the social and historical themes that Al Stewart frequently wove into his music. David soon broadened his listening to include many of the singer-songwriters, many of them American, whose music was gaining popularity, with Joni Mitchell, Neil Young and Bob Dylan as early favorites. Soon The Clash, Patti Smith and Elvis Costello would make an impact on Lewis. At college, where Lewis studied anthropology, his musical tastes broadened to include the likes of Lou Reed, Al Green, and Curtis Mayfield, and he could soon be found playing synthesizer in a local band, Zero Option. During graduate studies, he met Wes Stace (later known as John Wesley Harding), and a friendship rapidly developed. Lewis shortly found himself playing guitar and singing harmonies with Wes in a busking band around Cambridge, performing many of the old blues and folk songs they found on early Ry Cooder albums. While conducting field research in Bangladesh in the late Eighties for his PhD, Lewis started composing songs and performing, carrying on a songwriting collaboration with Harding via fax and phone. Several of their songs ('Red Rose and the Briar,' 'Ordinary Weekend,' 'Cupid and Psyche') eventually wound up on Harding's albums. Though Lewis continued his career in academic research, frequently visiting developing countries, he maintained his interest in music. With Harding's encouragement, Lewis traveled to San Francisco to record his first album with the help of Harding, drummer/studio owner Scott Matthews, and Robert Lloyd and guest Peter Buck from REM. Although the resultant album, 'No Straight Line,' was released to positive reviews, the record label it appeared on soon went bust, but not before expressing interest in a second record. Lewis and Harding soon started work on some of the tracks that appear on 'For Now.' Says Lewis, 'The result is an album which moves closer to folk-rock than the first collection, with perhaps a wider range of textures and sounds, but hopefully with a consistent overall feel.'
This website uses cookies to personalize content and analyse traffic in order to offer you a better experience.
I accept Learn More
back to top