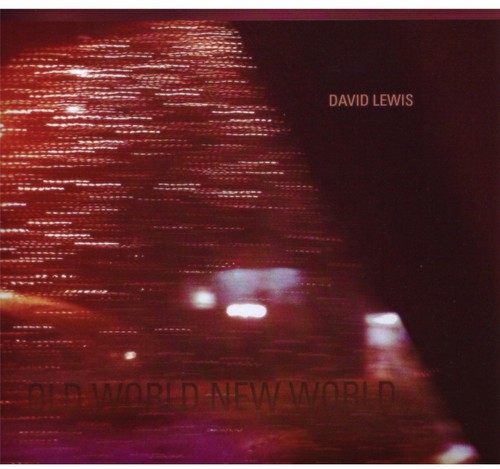 '[Ghost Rhymes is] an album I shall go back to more than a few times, in a word, exquisite' - Maverick magazine Unveiling his first album since 2007's well-received Ghost Rhymes, David Lewis' fourth record, OLD WORLD/NEW WORLD, contains twelve new songs, including two co-written with Wesley Stace (AKA John Wesley Harding) and one with London-based Oklahoma songwriter Bob Collum. David worked once again with co-producers Chris von Sneidern and Wesley Stace, and LA-based multi-instrumentalist Robert Lloyd. With strong echoes of the late 1960s and early 1970s British singer songwriter sound (think Duncan Browne or Al Stewart), the songs on OLD WORLD/NEW WORLD, are less adorned than on David's earlier albums. Each track has been intricately arranged around voice and acoustic guitar, variously textured with keyboards, bass and percussion, all unnecessary details stripped away to make room for the songs. These are mostly short and to the point, with little in the way of instrumental embellishment between verses. "There are really only two solos on the entire record", says David, "both of which are short and beautifully-played by Robert, one on guitar and one on mandolin (on 'Garden of Thorns' and 'Devil's Best Tune' respectively). After the record was finished, we realised we hadn't used any electric guitar anywhere: that wasn't a plan but it's how it turned out." These new songs tell persuasive tales that are nevertheless firmly rooted in the here and now. Album opener 'So Sing' asserts the simple power of song in a world in which human communication is increasingly conducted against a backdrop of technology and digital chatter. 'Thousand Clowns' is a simple love song inspired by a 1965 Jason Robards movie; 'Great Unwind', a light-hearted lament for our failure to grasp and act on the implications of the financial crisis. 'Sweet Hereafter' heads for more mystical territory, musing on the layered connections between past and present. The album, which builds further on David Lewis's trade mark style of gently reflective folk rock, distinctive songwriting and laid back vocals, was recorded in San Francisco's Hyde Street Studios, formerly the famous Wally Heider Studio, home to the recording of many classic early 1970s albums: "we were hoping that we would still catch some of the leftover vibes from those CSNY and Grateful Dead sessions", says David. "It's lovely to make music with your friends." The result is a slow-building album of expressive singing and committed musicianship, of hushed moments and surprises, best listened to in one sitting.
This website uses cookies to personalize content and analyse traffic in order to offer you a better experience.
I accept Learn More
back to top