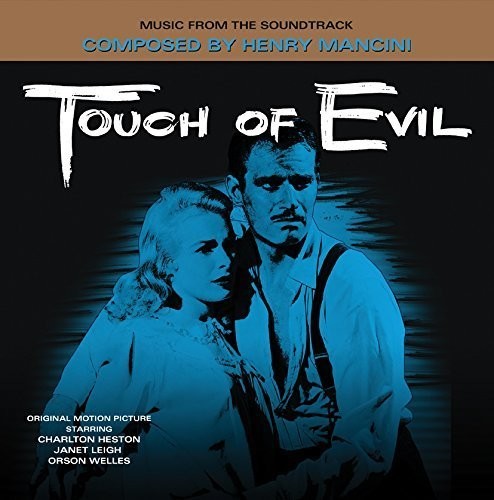 The vinyl reissue of the soundtrack from the movie "Touch Of Evil" by Henry Mancini - 180 Gram Vinyl soundtrack - Fifty years passed between the release of Orson Welles' last Hollywood production Touch of Evil and this 2008 reissue of Henry Mancini's soundtrack to the classic noir film, and the age of the music is apparent in it's foggy reproduction. The surface hiss and the fairly compressed audio are the first things one notices, and the flat monaural wall of sound on most of the tracks makes this seem like a direct transfer from tape with minimal enhancements. Still, this is a fairly clean remastering, and despite the occasionally boxy sound, the tracks are pretty boisterous and loud, so most of the instruments clearly come through. There is a pretty even distribution of '50s-era rock & roll, bossa nova, Latin jazz, boogie woogie, and blues styles in Mancini's score, and the sessions conducted by Joseph Gershenson have an authentic feeling for the time and are quite energetic and spontaneous for being studio recordings. Except for the opening bars and the last four tracks, there is little orchestral music in this soundtrack, and Mancini's use of low brass and percussion for ominous effect is sparing; the bulk of this album comes across as a vintage popular collection rather than as sinister mood music for one of the greatest B movies of all time.