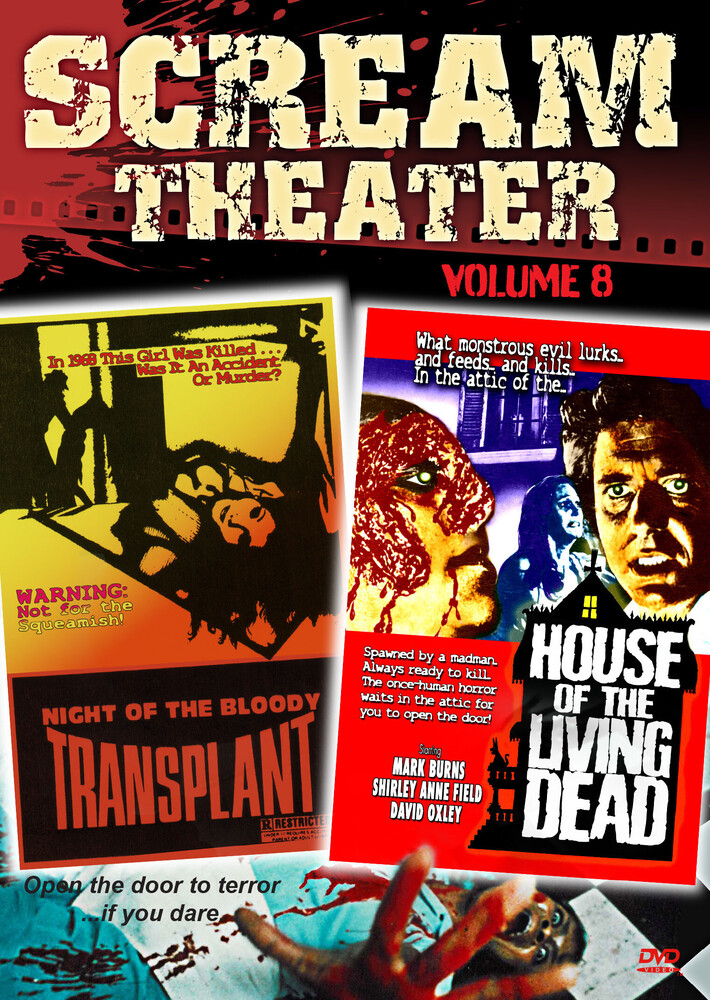 (The House of the Living Dead) Evil lives and feeds in the attic of Brattling Manor. The aristocratic, turn-of-the-century family has a deadly secret... And you think you have problems with your neighbors. The setting is a remote corner of the South African Veldt at the turn of the century. Lady Marianne arrives from London to join her beloved fiancĂ©, Sir Michael Brechenridge at his stately ancestral home, Brattling Manor. From the outset of her visit, things go strangely wrong for Marianne. Michael's autocratic mother is not at all receptive to the visitor. At night Marianne is disturbed by strange organ music and ghostly footsteps in the corridor. As time passes, further events increase the tension in the air, brutal murders with no apparent motive. (Night of the Bloody Transplant) Heart transplants are routine these days. But when Dr. James Arnold tried to get approval to perform a heart transplant for his elderly benefactor, the medical society turns him down. However, when this ne're do well brother accidentally kills a young woman, the doctor takes matters into his own hands. Threatened by a cutoff of funds, his benefactor gets a new heart.Â  br& style="color: rgb (51, 51, 51); font-family: Arial, Helvetica, Verdana, sans-serif; font-size: 11.52px; font-style: normal; font-variant-ligatures: normal; font-variant-caps: normal; font-weight: 400; letter-spacing: normal; orphans: 2; text-align: left; text-indent: 0px; text-transform: none; white-space: normal; widows: 2; word-spacing: 0px; -webkit-text-stroke-width: 0px; background-color: rgb (255, 255, 255); text-decoration-style: initial; text-decoration-color: initial;" Dr. Arnold has achieved his dream, but because of the young girl's death, can't tell anyone about his triumph. Meanwhile, his brother goes on a killing rampage and, in the bizarre turn of events that follow, Dr. Arnold also is killed, and his heart is transplanted to save a policeman the brother has shot. This intense film contains actual footage of open-heart surgery. /br&