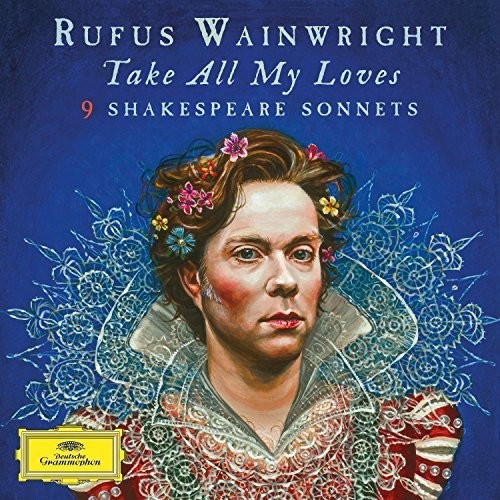 UK Import Rufus Wainwright celebrates the 400th anniversary of Shakespeare s death in typically dramatic fashion by releasing a unique collection of nine sonnets in stunning performances by both actors and vocalists.

Set for release on 22 April on Deutsche Grammophon, it also marks the first collaboration between Rufus and Marius de Vries since they co-produced the epic Want albums.

The performers on this new recording include vocalists Florence Welch, Martha Wainwright, Anna Prohaska and, of course, Rufus himself, as well as actors Sian Phillips, Helena Bonham Carter, Carrie Fisher and William Shatner.

The seeds for this album were sown back in 2009, when director Robert Wilson asked Rufus to compose music for his Shakespeares Sonnets production, first staged at the Berliner Ensemble. The San Francisco Symphony subsequently commissioned Rufus to orchestrate five of the sonnets, which they premiered in 2010.

Three of the sonnets featured on Take All My Loves first appeared on Rufus Wainwrights 2010 album Songs For Lulu, albeit in different versions. These are: When Most I Wink (Sonnet 43), For Shame (Sonnet 10) and A Womans Face (Sonnet 20).

For me, recording this album has been a marriage made in heaven, as it combines my love of classical music with my love of pop music, says Rufus. Its literally historically fun. And made all the better by working again with Marius.